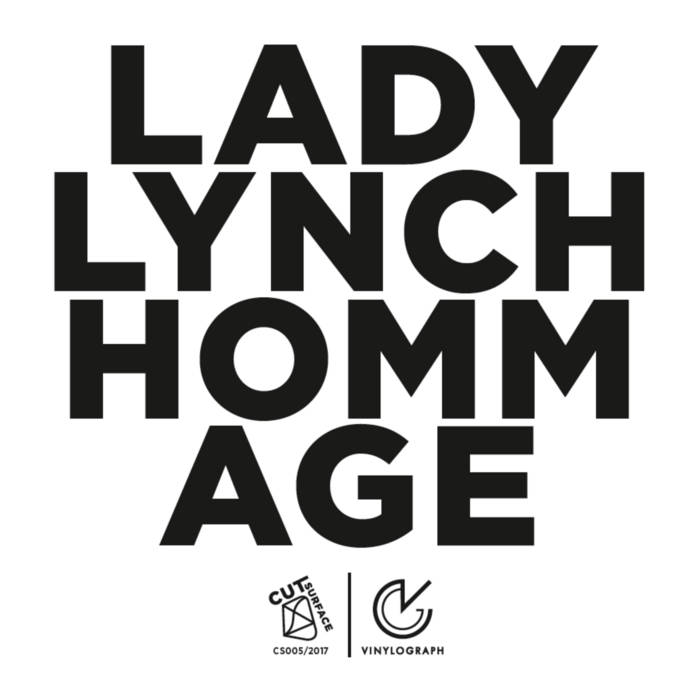 ⸸CoughCool⸸ Interesting, will take time to run through these with the proper attention to each version

The Vinylograph knows no mercy: what goes around, comes around – music production all upside down. Though LADY LYNCH played and
recorded 50 takes of their song "Hommage", nobody ever carved a studio product out of it, which could 've been cut umpteen times into
vinyl.

Cut Surface, Lady Lynch and Vinylograph rationalized the work steps on purpose and went for recordings and replication all in one chunk:
band played, Vinylograph cut. Now, down the road, 50 vinyl singles (a-side-only!) with 50 versions of the same song rally on the table. Each
one of them a singleton; yet, staple goods. "Hommage" is released as a limited edition run on April, 21st in a cooperation of Vienna–based record label Cut Surface and Vinylograph.

The Vinylograph is an automated vinyl cutting machine designed and constructed by Vienna–based artists Natascha Muhić and Christoph
Freidhöfer, and inspired by record booths from the 1940s. You sing/speak into the microphone, while the sound is cut into vinyl. Special thing about it is that the records are all cut in real-time, directly. Which also means that all along surrounding sounds (might) get captured as well. Every Vinylograph record cut is a singleton.
>> www.facebook.com/Vinylograph || nataschamuhic.at || www.kunst-und-raederwerk.net

Lady Lynch are "not a stranger anymore", bearing in mind that this art punk foursome cumulates members (Theresa Adamski, Philipp
Forthuber, Lina Gärtner, Christian Sundl) from esteemed acts such as Black Fox Tropical, Crystal Soda Cream, Just Friends And Lovers,
Wounds of Castrated Dicks to mention a few. Only just recently resurrected and reformed after several years of quiescence, Lady Lynch keep offering a dark blend of sharp minimalism, highly slick sense of timing and well nuanced repetition far–flung from monotony. With Gärtner's sternly ascetic guitar, Forthuber's bass, bulgy and tickling, and Sundl's restrained, yet elaborate drum work providing a perfectly moody and atmospheric backdrop to Adamski's vocals which are delivered in a deadpan fashion, "Hommage" is Lady Lynch's first record after their reboot and will have you bewitched from opening guitar strum to final cymbal crash.
>> youtu.be/M6Mh4tMpGAY || youtu.be/3LZORgEEii0

The cover artwork was painted by Vienna–based visual artist Philipp Hanich. Vinyl (color) on paper. Remaining true to the concept, all 50
cover sleeves are unique originals: front covers hand-painted, back covers silk-screened (layout by Kate Kristal). Added to this, Philipp
Hanich is known for his music under the pseudonym BRUCH. Those who listen carefully, might recognize some lines of BRUCH's hit "Take Me Home Vienna" in the lyrics of LADY LYNCH's "Hommage".
>> philipphanich.eu || soundcloud.com/bruch-2
>> youtu.be/TOpv2FYARH4 || youtu.be/bNV-sY5vVbI || youtu.be/DAd0kpUKusM

Hommage's recordings took place in Vienna's most heady 20m2 art space by the name of "Schönbrunnerstrasse 6" – all open to the
public. This is also, why a few recordings feature guest musicians, who chanced along spontaneously. Over the course of two days in February,
a 10-headed team carried out the complete project: 7" singles, art work (hand-painted fronts + silk-screened backs) & audio-visual
documentation… (almost) everything accomplished on site.